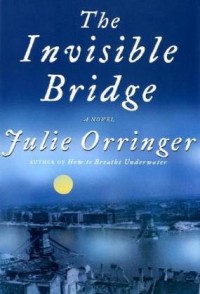 I've had my eye on this book since it was first published. The size, the cover, the promise of an epic: all these enticed me. It is only because of other commitments I didn't read The Invisible Bridge sooner. And then there were the lists and the ratings, all of which promised a fabulous read. In the end The Invisible Bridge was all it promised to be, yet it fell flat.

Orringer's debut novel is certainly epic. It is the sort of story I can imagine Tolstoy penning. The story spans many years and reaches from one edge of Europe to another. It offers a unique perspective of the Hungarian Jews throughout World War II. For the large part, the Hungarian Jewish population did not receive as harsh of treatment as the rest of Europe's Jews though they were given few freedoms and worked in labor camps; it wasn't until the final months of the war, during German occupation, that an attempt to exterminate Hungary's Jewish population commenced. Interesting...

Except it wasn't. Hundreds and hundreds of pages are spent building up these characters that once the rages of world war rise up the events rush past. And that might work if I was invested in these characters. But, despite the considerable time spent molding the characters right in front of me, I wasn't invested and only because these characters and their stories weren't believable to me. The Lévi boys are saints. The relationships they have with their wives is worthy of an article in Marriage Partnership. The number of characters who come out of these atrocities alive—due to every convenience possible in a time of genocide—is hugely disproportionate to the facts. The Invisible Bridge seemed closer to an allegory or fairy tale set during WWII than an historical novel. There's a ton of good stuff in these pages, I just could believe in it enough to fall in love with it.

The speedy ending. The non-fleshed characters. The Invisible Bridge felt to me like a first draft. Maybe it was. Maybe after more than 600 pages Orringer was eager to move on to something else. Maybe the publisher was applying pressure. I don't know. There's certainly some potential in this one, but not enough to bridge the enormous gaps it leaves wide open.