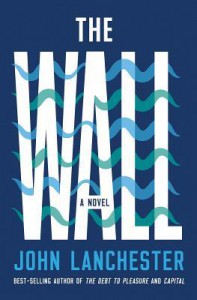 [Epic movie trailer voice] Once there was a world. A world where great lands divided the seas. A world where one could live and die without ever having seen the ocean.
...
That world is gone. Humanity waged war on the oceans... and it lost.
…
In a last ditch effort to save what precious little they have left, an entire nation has constructed a wall. A wall that keeps desperate marauders out. A wall that keeps a nation in.
...
Before Waterworld, there was... The Wall.

This film is not yet rated.


In this prequel to the 1995 film Waterworld, the water is rising, land masses are shrinking, and a technologically advanced island nation has built a wall. If only a big giant wall meant to keep outsiders on the outside had some real-world application. Really, you can quickly forget the connection between this book and Trump's wall. What you cannot unsee is the birth of Waterworld.

My biggest complaint about this book is simply that a well-meaning, relevant agenda does not make up for a story that is not compelling. The plot is thin—there's the part of the book on the wall; then there's the part off on the wall. The world-building lacks originality—it's 50% of our modern world; 50% of a post-apocalyptic water world; with the addition of a wall. And the characters do absolutely nothing to make me care.

I'm beginning to wonder why I gave this novel three stars. Maybe because I'm very reserved with one and two star ratings. A book has to be terrible to receive either from me, and though The Wall bordered this territory, I can say it had some redeeming qualities. Like that scene with the pirates—that was riveting and heartbreaking. What else? There was that concrete poem:

I liked that part. And there was the pirate scene.

Hopefully my feelings regarding Waterworld have not been construed by my tongue-in-cheek approach to The Wall. I'm that one guy who has found memories of the box office flop. I was also fifteen or sixteen when I saw it. Maybe if I'd read The Wall when I was that age, I'd have found it profound and thrilling.

Every Booker Prize long list has its one or two books that makes you wonder, “Why on earth was that selected?” We readers don't always agree on what those books are, but there's often some consensus. This is only the second book from this year's long list I've read so far, and I truly hope that after I finish the remaining eleven, I can say this was the worst of the lot.