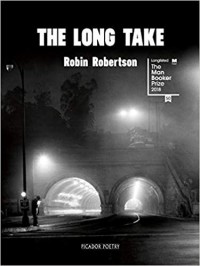 There are always one or two Man Booker nominees that are all about the form, excessively so. That's not a bad thing, because sometimes those books still have substance, or maybe just a beauty that astonishes. But it's not uncommon for some of these books to lack all but form. Enter this year's novel in verse, The Long Take.

What's great about The Long Take? There are some gorgeous passages that read in their poetic form with pure delight:

The view from the window was west, over to Russian Hill,
and the bay, and the Golden Gate.
He doesn't deserve this city,
its play of height and depth, this
changing sift of color and weather.
The water held in it a shimmy of light
and the days were warming through June and July
and the road that threads through the hem of the Highlands
would now be decked with wild stock, lupins and apple blossom
all the way to Chéticamp and Pleasant Bay.
She will be wearing her sleeveless dress, cornflower blue
and walking away.
He could not call her back to his life: which is a horror,
which is the dead calf in the bank-head field, a black flap
bubbling with maggots,
ugly and wrong.
Her clean eyes could not see this,
what he has become.

And there are passages that when put into verse drag and drag, particularly the lists Robertson likes to utilize throughout this work:

This afternoon there was a film-shoot going –
all the regular stuff, generators, cables, lights on tripod,
camera tracks, grip stands, hangers, wardrobe rails –
and there was Cornel Wilde having a smoke,
talking to this short guy, so they all strolled over, friendly like,
to say hello. Rennert wanted to talk about Leave Her to Heaven
and Gene Tierney, so he did,
and the actor was smiling and nodding,
so Walked turned to the other guy,
who said: 'Hi, I'm Joe.'
'Are you in the picture?' Walker said.
'Nah,' he smiled. 'I'm just making it.'
Then it clicked. He'd seen his face in Photoplay.
This was the man who shot Deadly Is the Female –
Gun Crazy, as it came to be.
This was Joseph H. Lewis.
'How did you shoot that sequence, eh?' he was asking, suddenly,
'Y'know, from the back of that getaway car?'
'Well, son, I'll tell you –
if you tell me a decent bar on Main Street
near the Banner Theater. We're there tonight.'
'Easy. The King Eddy's on the very same block, east of 5th.'

The Long Take vacillates between these two extremes: poems that are not allowed to breathe in the confines of the larger narrative; a narrative that is broken into verse purely for the sake of being verse.

Once I began to treat each brief section as a single poem linked to a larger collection, once I began to read them aloud, or imagine them being read aloud, I started to enjoy this “novel” much more. Still, the lack of narrative and story, paired with the inconsistency of the verses, did not make a very favorable impression on me. The promise of a story about a veteran dealing with PTSD fell flat. There are some good moments in The Long Take, but sometimes it takes far too long to find them.