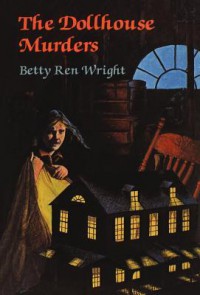 When you work at a library, it's not uncommon for discussion to center around books. So imagine, one day, my colleagues and I are discussing the juvenile classics of the 80s. (By the way, this conversation was birthed while browsing the pages of Paperback Crush by Gabrielle Moss.) From this conversation came a call to read The Dollhouse Murders. I said, sure, why not. Immediately I regretted this. I had far too many books already on my to-read pile. It was Man Booker season, and I really didn't have time for a juvenile mystery about a dollhouse. But I checked out the book anyway.

Fortunately, the copy my library had was the original 1983 hardback. Why was this a good thing? Because it transported me to a very different time. How different? Let's take a look at the novel's description from the flap:

Each time Amy goes up to the attic in the middle of the night, the dollhouse is filled with a ghostly light and the dolls have moved from where she last left them. Even though Amy's terrified, she knows the dolls are trying to tell her something. But what? Could their movements be connected to the grisly murders that took place years before?
Amy becomes increasingly alarmed when her aunt Clare, who owns the dollhouse, grows angry at her questions.
In a spine-chilling climax, Amy and her retarded sister unravel the mystery and liberate their aunt from a terrible burden of guilt. [emphasis mine]

That was the 1980s for you. Amy's sister didn't even have a name. (Fortunately, Betty Ren Wright was much more sensitive to Amy's sister than whomever wrote that copy at her publisher's. Amy's sister is named Louann by the way.) I cringed as I cracked the cover.

I admit my expectations were low. I can be a little bit of a book snob, and The Dollhouse Murders clearly wasn't going to be “my thing.” What more can I say? I was sucked right in. Taking into consideration the intended juvenile audience, The Dollhouse Murders presents an interesting cast of characters, as well as a story that is chilling and riveting. Sure, it's an absurd plot about dolls reenacting a murder, but it's well-written and compelling. It's a mildly scary mystery, not all that different from your average Stephen King story. Sure, for every part King there's one part Judy Blume, but I consider that an asset. For one thing, Blume is far better at creating believable, multi-dimensional characters than King ever was. No different here. Though The Dollhouse Murders was certainly little more than juvenile escapist lit, it was a very entertaining read.

Also a plus, the original author photo: 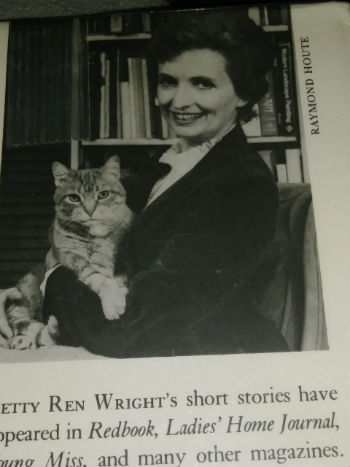 BAM! Check that out. Make no mistake about that cat's expression: he or she is the real writer here.