Review: The Year of the Runaways 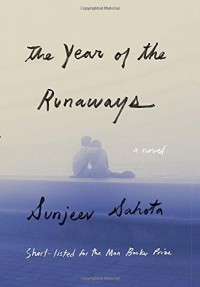 Finally, I am able to read the last of the 2015 Man Booker shortlist. I make it a point to read the whole list before the prize is awarded, but American publication dates make that difficult sometimes. The Year of the Runaways, a novel about Indian refugees in England, was this year's holdout: the book that wouldn't be published in the States until months after the award.

So I read the book and, finally, I'm getting around to this review. It's been more than a month since I finished The Year of the Runaways. As I look back, I'm struggling to remember what it was I even read.

It's not that The Year of the Runaways wasn't memorable in any way. Some of the scenes and characters really stuck with me. It's just that The Year of the Runaways is such a sprawling story and those moments are sometimes few and far between. What lies between these moments is not ornate or profound, but just the simple telling of a story. There's nothing quotable here. Nothing one can point to as a defining unique characteristic of the novel. It's surprisingly uncomplicated for a Man Booker nominee. Despite this simplicity, the story is well told. It's smooth even as it makes jumps in time, place, and character. The subject is certainly poignant, but it's questionable whether The Year of the Runaways has long-term staying power. One may equate it with The King's Speech in a year that also brought cutting-edge films such as The Social Network and Black Swan, or Argoin a year with such a visually stunning feat as Life of Pi. These historical, plot-driven movies were enough for the Academy of Motion Picture Arts and Sciences to take notice, but it seems the Man Booker judges were looking for something more.