Review: The Buddha and The Borderline 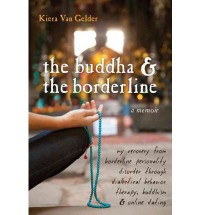 Fifteen years ago I was diagnosed with Borderline Personality Disorder. Like many similar diagnoses, I'd had the symptoms most, if not all, of my life, but had finally been given a name and understanding of what it was that possessed me. After my diagnosis, I studied BPD extensively for a few years and I got better. That's not to say I was healed from BPD, in fact, I was far from a “full recovery,” but I began to understand some of my behaviors and triggers. I also started individual therapy—this didn't go so well and eventually I quit. Somewhere in my studies, probably four or five years after my diagnosis, I first heard of Dialectical Behavior Therapy (DBT); it was touted as the best cure for BPD, but I had my doubts (and fears), so I continued with my self-therapy and studies. Along the way, I plateaued. I didn't want to admit it, but I did. All forward motion came to a stop. I'd done everything I could on my own and I still was an anxious ball of fear wrapped in a lovable fury. I decided it was time to check out DBT—and then I dragged my feet another couple years. Finally, things were so bad and I was so hopeless that I had only two choices: self-destruction or DBT. With some reluctance, I chose DBT. To celebrate my initiation into group therapy, I decided to start reading this book.

The Buddha & The Borderline is merely one person's story of living with Borderline Personality Disorder. As I've read other similar books about BPD, I've come to learn that while the symptoms and internal feelings are identical, the way they are manifested may be wildly different. Van Gelder's experience is very different from mine, but what drives her is very familiar. The thing I liked most about this memoir is that it really shows the progress Van Gelder makes. Other BPD stories and memoirs tend to place the focus on the illness, leaving a chapter to two for the “road to recovery.” Van Gelder's approach is show her gradual improvement throughout the book. Yes, she's still struggling in the end, but as soon as she receives her diagnosis in an early chapter, she is off and running, searching for help and being willing to take it.

If The Buddha & The Borderline failed in any regard to reach me, it was simply that I felt Van Gelder took out some of the magic from her journey. One chapter we see a broken Van Gelder enter therapy, we get an overview of what happens inside, and then months pass and Van Gelder is doing better. These jumps in the path of the author's recovery happen frequently. I wanted to know more about that internal struggles she faced. That's not to say Van Gelder completely glosses over her struggles, not at all, but there are certainly times I would have liked to have known more about her thought process and less about the people in her surrounding circles (therapists, boyfriends, etc).

Overall, The Buddha & The Borderline is a typical memoir in many ways and probably one that would only interest those concerned with mental illness. There are select chapters, however, where Van Gelder really shows her talents as a writer. When she's not simply regurgitating facts, when she's digging deep within her and bringing her darkest moments and thoughts to light, she is a very talented and magnificent writer. It is for these moments alone that this book rises above many other similar books.