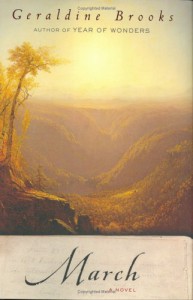 As I read March, I repeatedly wondered why I wasn't enjoying this novel more. Initially, I thought my lack of adoration was the result of historical-fiction burnout. March feels and sounds like so many other novels I've read. And this may have been part of my disinterest. But I think a larger part of my feeling (or lack of feeling) rests in a different comparison.

March offers another perspective of Louisa May Alcott's Little Women, that of the father. I've had a good record with novels that take minor characters and make a full story from them: Ahab's Wife is one of my favorites. That said, I thought I'd really like a Civil War tale about the March father. But Mr. March never really separates himself from his little women. His continual reminders leave a link I could not shake; I never felt like it was his story. As such, it was impossible not to compare.

March is written extraordinarily well. The structure and language are both great assets. As far as craft, March is a step above its predecessor. But the endearing beauty and magic of Little Women isn't here. It isn't supposed to be, as this is the tale of a father who suffers much. It is the story of a man who endures a year of horror and grit knowing radiance awaits him at home. It's a great contrast to Little Women, which I believe is the intent, but the comparisons make this novel drag in the mud behind the names Meg, Amy, Beth, and Jo. It was during the scenes with these four girls that Mr. March seemed the most real to me. Though we have only a glimpse of Mr. March in Little Women, it seems that the actions of March's protagonist are uncharacteristic, as are some of the actions and thoughts of Marmee, his wife.

This novel doesn't feel so much like another chapter in Alcott story as it does a complete reworking. Only in the final chapters did March evoke the real warmth of its inspiration. A most fitting end to an otherwise unequal novel.