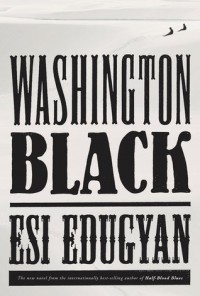 Washington Black is an imaginative novel that crosses boundaries, boundaries that exist in the story and boundaries that tend to hem in literature. It is a novel that is not easily classifiable, because it is very literary, but it also shows traits of fantasy and adventure. It is historical in setting, but does not allow this to confine its reach. A story of self discovery, Washington Black explores the topics of suffering and rebirth. It sounds like a fantastic novel, and the opening chapters prove this. What a perfect beginning! At 35 pages in, I knew I'd found the best novel of the year, an easy five-star rating. So what happened?

The fact is, Washington Black does little to sustain the wonder created in the opening chapters. The first several chapters are perfect. They're brutal, intelligent, and imaginative. I truly couldn't ask for more. The story opens with an amazingly drawn cast of characters, slaves and plantation owners on an estate in Barbados. We see the plight of the other slaves, as well as the conflicting natures of the plantation owner with his abolitionist-minded brother, through the eyes of young Washington Black—called Wash. The brutality of this particular plantation and the wonders set in motion by the brother, Titch, a scientist, create such a wonderful contrast. It's easy to imagine where this story might be going when Titch takes Wash under his wing, but it's a place that you, as the reader, want the story to go. It's magical, heartwarming, and full of imagery so palpable you can't deny its existence: a Vernes-esque journey around the world with a kindhearted scientist and his assistant, a child freed from slavery.

Unfortunately, this novel just can't maintain the forward movement it needs to claim its potential. The characters, while starting off great, did little to keep me invested in their stories. Sure, their adventure is wonderful, but their actions are wooden and their decisions based on inexplicable coincidences. They failed to carry me along on their adventure. The longer the story went on, the less I believed the magic the story was built on, the less I cared about the narrative.

In the end, I was left with too many questions, but not enough desire to find answers. What was really going on here? In a novel largely based on realism, it is easy to pick out the fantastical elements and analyze them. What was with the allusions to the spiritual personas of our characters: others that roam free of their selves? The existence of these “others” makes me wonder. Who was Washington Black? Was he a spirit of the self that existed in the opening chapters, a spirit making his way back to Dahomey? Was he reborn in the child Titch finds in Morocco? At the conclusion of Washington Black, I don't have any answers, only speculations. These questions display the intelligence of this novel and its author, but highlight the problem that it doesn't go far enough to provide answers or the will to learn the truth.

Washington Black is a powerful and imaginative story with so many great pieces. The writing is exceptionally powerful at times. It just doesn't keep it going, however, and the result is a firework that fizzles out long before the end. I recommend this novel to others, but with the caveat not to build your expectations too high in the beginning. Perhaps if I'd not done so, I would've walked away with warmer feelings regarding this story.


Thanks to the publisher, Knopf Publishing Group, for providing me early access to this title through NetGalley.