Review: Barefoot Gen: Never Give Up 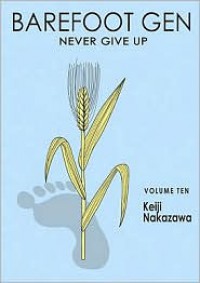 Never Give Up, the tenth and final volume of the Barefoot Gen series, is a worthwhile end. Like its immediate predecessor, it is also guilty of being a bit too episodic and losing the primary thread, but its a little more focused and does provide a mostly satisfactory ending.

Reaching the end of the series, seeing the entire story for what it is, I have a few thoughts on the story as a whole. Throughout, I felt the series relied too heavily on comic violence and mischief. I'm sure there was a reason for this, perhaps the author wished to lighten up an otherwise bleak story. Personally, I found it distracting. Characters were frequently beating one another up over silly matters, urinating on one another, throwing feces, mooning, and farting. Once or twice is one thing, but it happens many times in each volume. There's an immaturity to these moments that is often reflected in the illustrations themselves. How is it that a series that's clearly and constantly proposing peace is so insensitive to the feelings of others? Nations are expected to stop all wars and dispose of all armaments, but our characters maim and even kill those who disagree with them, sometimes over the smallest argument. I agree with the author's anti-war propaganda, yet I cannot deny the hypocrisy displayed in the sanction of needless violence.

As the series progressed, especially after the midpoint, the story became less and less relevant. New characters were haphazardly injected into the story just to create new plotlines. Some of these characters were introduced and quickly assimilated just so our protagonist would have someone to mourn by the book's end. Better foresight would've allowed the introduction of these characters in earlier volumes and allowed the reader to grow attached to them. Unfortunately, none of the deaths in the final three volumes carried any weight. There wasn't time to develop the relationship. The last death that was truly meaningful was the death of Gen's mother; her death needed to be the climax of the series. One volume after that to tie up the story would've been fine. In my opinion, the last three volumes could've been condensed and served as the eighth and final volume.

Despite the crude moments and, at time, illustrations, and despite the poor plotting, Barefoot Gen is stellar when its at its best. The horrors of atomic weaponry are rendered in a way that forever seers itself in the reader's memory. Even with the limitations of the black-and-white cartoons, Nakazawa really put his soul into some of the illustrations, nightmares and all. The agony of the fire, the stench of the corpses, the intense pain of losing control of your body years after the disaster—all of these are vividly on display. The way characters thrown their heads back at awkward angles as blood projects from their throat, the way the landscape is littered with corpses whose hands are outstretched, but whose fingers are curled, the way the sun continues to burn and give life—all are rendered with extreme care. The Barefoot Gen series is at its best when it shows the emotions—the heartache, the horror, the hope—and at its worst when it tries to be preachy or comical.