Review: Are You There God? It's Me, Margaret 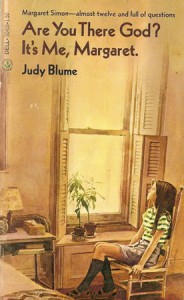 If you look through my previously read books, you won't find any Judy Blume. This omission is not because I truly haven't read Blume, but because it has been so many years and I'm not entirely sure which books of hers I did read. I know I read several from the Fudge series, but did I read them all? If not, which ones did I read? I'm pretty sure I read some of her other works, but so many of the titles sound familiar and I know I didn't read that many.

Recently, I was thinking of Blume and figured it was high time my grown-up self read something of hers. Would my adult perspective make her stories any less earth shattering? Nostalgia would surely boost my feelings for something I'd read before, so I decided to try one I knew I hadn't ever read. I went with the classic Are You There God? It's Me, Margaret.

If I was the person I am now back in elementary school, I so would've read this book. Back then, however, I had little interest in reading fiction books (shocking, isn't it?). I wasn't as much of a reader then, either, but what I did read was largely Strange, But True Facts and Garfield and World Records and... And surely I was not going to read a “girl's book.” (Thank you society for filling young minds with such stupid concepts.)

Despite having never read this book, nostalgia took over. Totally. There's a feel to these books (is it just Blume or all children's books of the era?) that is unique. Regardless of the novel's subject matter, I couldn't help but think about the Challenger and be filled with a desire to watch Who's the Boss?. There's a magic to these stories that probably would be lost on someone not born in the seventies or eighties. (I have a feeling kids in the nineties were still collectively reading Blume, but it's only a feeling. Can anyone confirm or deny?) Sure, there's a universal appeal that I'm sure still entices some young readers, but I doubt most grade school libraries are constantly running out of Blume novels like they were once upon a time.

Aside from the nostalgia, I largely enjoyed this story, but it did not impress me as much as I had hoped it would. Frankly, I felt the story was cut short. Brevity is a necessity in these stories, but this one had such a slow build up and then it was over. Also, it's all rather shallow. The characters are shallow. The plot is shallow. The philosophy is shallow, as is the religion. This is all rather a tame approach to the serious problems of a upper-middle class white girl in America. But you know what? So be it. It's Judy effin' Blume.