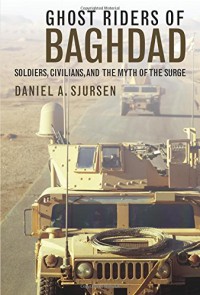 Ghost Riders of Baghdad is a book of contradictions, and because of this, I have contradictory feelings about it. On one hand, Sjursen is an intelligent and articulate writer with unique insight regarding the Iraqi War and a proper understanding of middle-eastern history. On the other hand, Sjursen is a soldier who has a jaded perspective and ignores some of the facts. It's likely the author is still working through some of his feelings, still sorting through the emotions and the rationalizations, but this book captures that moment and still does a valid job of shining a spotlight on the US invasion of Iraq.

Sjursen knows history. He knows the players on the field and is able to label their sentiments and objectives in detail. He is articulate and well read (interestingly none of the authors he mentions are female). He is assertive. He is able to admit mistakes. And he is bold in his assertion that the war was full of corruption and lapses of judgment.

Despite attacking the war, Sjursen defends the army tooth and nail. Instead, he largely focuses his attack on the civilians at home. He complains about the passivity of the American populace and their ignorance of the war. And while some of his claims are certainly true, Sjursen overgeneralizes considerably, ignoring the protests that united a world against a war. While millions protested, Sjursen was an enlisted soldier. And perhaps those protests dwindled with time, but only because those who protested knew better. They knew there was no stopping the machine once the cogs began to turn—and Sjursen, despite his eventual position on the war, was one of those cogs.

The majority of the author's complaints are in response to “The Surge” and its ineffectuality. Sjursen argues that despite the assurance of government officials, the surge was a failure. He complains about how the soldiers were bullied, forced to extend their stay, because the numbers simply weren't there. He suggests that a draft should have been utilized. Here is a classic example of how confused the author seems to be about the facts. Despite his disagreement with the war, he proposes implementing a draft. Not only does this not make sense, but it ignores the fact that a draft would've worked counter to the goals of the American government. A draft would have taken the blinders off of the American populace. Concerned for the welfare of their non-combative child, the average citizen suddenly would know exactly what was going on in Iraq. Obviously, a draft would've been the quickest way to shut down the war. It would've been Vietnam Part II. That Sjursen, despite his impressive knowledge of Sunni and Shia relations and the history of Iraqi neighborhoods, does not realize the results of forced conscription on the war seems way off.

In my opinion, Sjursen is spot on when he is not ruled by his emotions. Justifiably, he is upset and angry about the results of his time in Iraq. But he's largely placing blame on the wrong people. We were in the streets. We were arguing against the war. We were making music and lifting our voices in protest. For what it's worth, we were here...