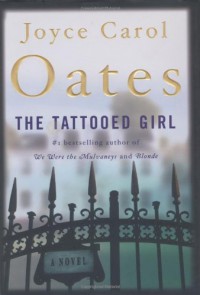 Years ago, I fell into Oates. It started with a short story that I really loved, “Shopping”. From there, I jumped into one novel, then another and another. It seemed like I was going to read a lot of Oates in my lifetime. But I could tell her writing was a bit hit or miss, a consequence likely from her prolificacy.

So I told myself years ago that the next Oates I would read would be the collection that contained the story that got me into Oates's writing originally. I had a copy of Heat on my shelf and, despite the best intentions, it remained unread. Year after year it sat on my “to be read immediately” pile, never to be read. More than eight years have passed since I last read Oates. I was fed up with looking at Heat in my to-read pile, so I decided to do something about it: I read The Tattooed Girl. I don't know why, but at least it delivered me from my Oates drought.

So here's the thing about The Tattooed Girl: it has some problems right away. First and foremost, there are some cliches about that are probably best left alone at this point. We're talking renowned bachelor Jewish author who is a recluse kind of cliché. Sure, these people exist—I'm sure Oates herself knows quite a few of them—but reading about them is almost as painful as reading any novel about an author. (If there's ever an author in my own fiction, he or she will be an object of satire and nothing more, I swear.) But even with the overwrought author and the sexy, sexualized girl who shows up at his door to be an assistant, the book holds some promise. The dynamics are interesting enough. The characters show some potential for growth. And the mystery and tension build steadily.

But then Oates does what she does best: she moves onto the next novel. I mean, when Oates has a great story and takes the time to develop it, it is a magical thing. That said, I've read enough to know that the greatest care is not put into all of her novels. Look at how often she publishes and you get an idea of why this may be—she's just not taking ample time with some stories that deserve more. The result in The Tattooed Girl is that despite building some fabulous (albeit cliched) characters, Oates could care less about them. They don't really develop, certainly not naturally. It feels as though these are merely character sketches that are quickly thrown on the page with very little affection. Good ideas abound, but the self-indulgence of a good idea does not breathe life into a story. The Tattooed Girl is chock full of ideas, but it lacks the pulse to make it a thing of beauty.