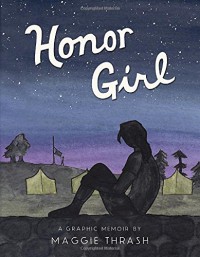 Honor Girl is a cute story, I guess. It's also painfully juvenile. Supposedly, this is a memoir, but there are things about the story that really seem a reach. For instance (and all this is established early on, so I'm not spoiling much), Maggie suddenly decides she's a lesbian, admits to it with hardly any hesitation when confronted, and writes a letter to her brother confessing her change in orientation. All this despite being a Southern girl from a conservative background, attending a Christian camp. If this is truly her first experience questioning her sexuality, doesn't it seem likely that she would spend a little more time pondering her choice? Wouldn't she maybe lie? Would she really send a letter home the next day which says outright that she might be a lesbian?

Secondly, this is supposedly a Christian camp. I get it, Christians can be huge hypocrites. But in Honor Girl, all the campers and counselors are about drinking, drugging, cursing, and sexing. Really? Where are the devout girls whose biggest concern is secular pop music? Where is the counselor who friends girls just to save their souls, then moves onto the next heathen? It's clear that Thrash, the author, doesn't particularly care for religion, but by illustrating all the characters in the same simple and dim light, she has essentially made a caricature that does not stand up to pressure. Again, such a tantrum-laced perspective seems juvenile.

Honor Girl (what's with the title anyway?) — Honor Girl isn't a bad story. In fact, the story at the heart of Honor Girl is relevant and heartfelt. The tale of a young girl questioning her sexuality at a religious camp is great. It's not the story, but the presentation of it that bothers me here. Everything about it feels immature. I struggle to believe that it was so all so clear cut for young Maggie. (Or Erin, for that matter. Who is she? Why does she travel 1400 miles to return to be a counselor at a camp where she doesn't fit in?) Seemingly, Maggie's only pain is the question of young love—does she or doesn't she? It's the one part of the story that nearly all of us can relate to. Aside from a broken heart, this memoir reflects an After School Special more than it does real life.

___
Reading through other reviews after writing my own, I'm surprised at how often humor is mentioned. It's hilarious, other reviewers say. I don't remember laughing or even smiling once, but I am an old curmudgeon. Clearly, I was not the intended audience.