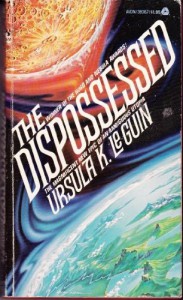 Ideas alone do not make great novels. I see this truth most clearly illustrated in Orwell's 1984, but there have been many other novels that neglected the story for some random thought or theory. There are many people who love these stories—I, in my many attempts to figure out what is wrong with me, cannot figure out why. I tend to find them not only boring, but unrealistic (NO! Not the rats! Not the RATS!!!). So anytime I come across a novel that is the next great such-and-such or anti-such-and-such, I am wary. Even if it is promoting a philosophy I agree with, I'd rather read about it in a work of non-fiction. When I sit down to read a story, I want a story, and I want characters; I don't not want political theory.

So I had some apprehension about reading Le Guin's The Dispossessed. I'd heard of comparisons and they were not pleasant comparisons. Add to that my lack of comfort with many science-fiction stories (I love sci-fi, but most of what I've read is weak in one regard or another). But I'd also heard so many good things about Le Guin in general that I knew I couldn't drag my feet forever.

The Dispossessed is certainly guilty of pandering to theory-seekers. There are moments when Le Guin lets the story get away from her and become a discourse on government. Characters step out of character and discuss politics in a manner that doesn't seem organic. But these moments are few and far between. Overall, Le Guin keeps to the story and the story is a good one. Not only is Shevek's journey to Urras and his subsequent understandings interesting, but the worlds Le Guin has created here are wonderfully built; careful attention is given to ecology, topography, etc., and especially to society.

I thought the concluding chapters were a little shaky. They distracted from the novel's best moments. But that's the worst I can say about this novel. There are those distractions, moments when the theory takes center stage, but these distractions kindly step aside and let the story have its share of the spotlight. A refreshing variation in regards to the idea-based novel.